Dolly Sods and the Life on the Allegheny Front Series

I can't believe its already the middle of September! Here on the Creek, family life has been crazy busy, so time is flying right by - but once again, I'm ready to pick up my pen and get back to my fictional family!

Speaking of fictional families, recently someone asked what in the world ever prompted me to start writing...let alone a create a family, map out a location, and write an entire series! Seriously, what was I thinking?

Well, their question stumped me so I had to rack my brain, asking myself that same question: "Why did I start writing?"

Then it hit me: talking to my sister about our Granddaddy's red mitten!


The answer to how just one wool mitten ended up in our mom's cedar chest remains a mystery, lack of information has fueled my imagination. The result: a typical mountain-farm family facing life head on - yet holding on to things they'd best let go.

Molly can't seem to let go of her self-imposed spinsterhood, even after Pete Evans declares his love for her! I'm mean, come on lady, give the poor man a break! Years later, she finally does just that...if only she had a nursemaid...

This 'frumpy nursemaid' has a ton of insecurities and she's holding on to them with both hands! When she catches the eye of the devilishly handsome Bo Evans, Julia's temper flares, and he falls head-over-heals. But it'll take some persuading, and the introduction of rotten beauty Georgette Chamberlin to set Julia and Bo on track.

How rotten is the beautiful Georgie?
She seems pretty rotten...maybe she can be Redeemed by Faith? 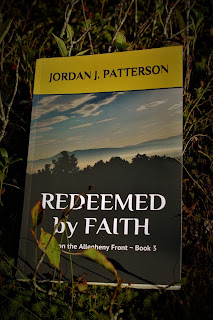 When the youngest Evans brother, Nicholas, helps reveal Georgette's true colors, he brings more to light than he'd bargained for - like closets full of skeletons. Skeletons Georgette has spent a lifetime hiding...even from her older sister, Emily...


Emily...Nathaniel...James...what's going on with her and these guys anyway? 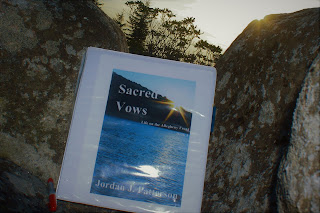 Well...to be honest, I haven't figured that out yet.

So the other evening, when I needed a little creative inspiration, I grabbed these books and my camera, slapped together a sandwich or two, and headed to another spot of inspiration for the series: Dolly Sods Wilderness...hoping that somewhere along the path, I'd find the right ending for book 4 - Sacred Vows! I'll keep ya posted on how this turns out! 😊 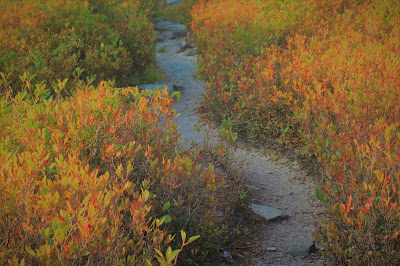 Until next time - Happy Reading y'all!

For more on the series or to order, click here! --->> Jordan J. Patterson 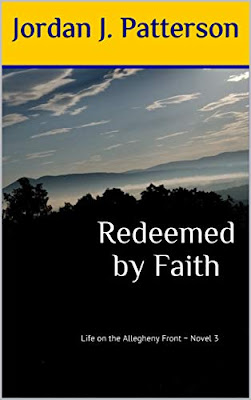 Redeemed by Faith is now live for purchase! Here are a few of my early morning thoughts on the book:

Have you ever done something that went against your true nature? Something that eats at your gut, making you question who you are as a person? It happens...and in Redeemed by Faith, we get a front row seat as life changing events are faced head-on, but not without questions, tears, fear, and faith.

Books 1 and 2 of the Life on the Allegheny Front Series gave us a good feel for who Nicholas "Nicky" Evans and Georgette "Georgie" Chamberlin were as individuals (one is thoughtful and one is selfish; one is grounded and one is unsettled), but in book 3 we see them morph from self-absorbed individuals, into a selfless and responsive couple!

Life on the Allegheny Front - the series 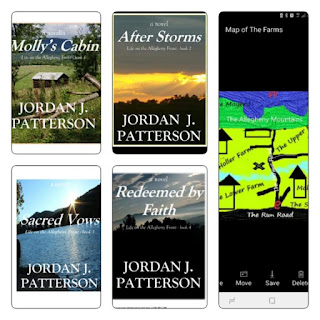 I am happy to announce that 'After Storms' is FINALLY under final review by the author!

And y'all...if I've learned one thing about self-publishing it is this: Editing is not fun and can actually kill creative drive! With that said, I've registered for a couple writers conferences and courses to help me better understand this daunting task.

In the mean time, I picked up a copy of book 1, 'Molly's Cabin', and sat down to criticize my own work...instead I found myself caught up in the story!

Just wanted to take a moment to share a little more about the Life on the Allegheny Front series.

Featuring the Evans family farms, located in a clannish rural community, the series deals with a variety of hard life lessons and painful choices.

While the characters and story lines are fictional, I choose to 'recycle' a few family names as a tribute to my late parents, grandparents, and great-grandfather. But, once again, the story line and characters are fictional. The situations they face, however, are sadly enough true to real life...

So far, plans for the series include the kickoff novella, Molly's Cabin (released 2/26/19) to be followed by book 2, After Storms (scheduled release - March, 2019).

For Summer, I'm torn between the exact sequence of release...originally, I had planned on releasing book 3 - Sacred Vows, (featuring Nate's battle with PTSD and his best friend, Emily's, family demise) and then this fall, book 4 - Redeemed by Faith (featuring Nick's rite of passage into adulthood with a twist even I didn't see coming!). But creative flow may dictate that the sequence of release change when summer rolls around :-)

Although I released a sneak preview of After Storms in the novella, I wanted to share this scene with y'all - as a mother to adult children, it really spoke to me:

Rhee’s words still struck a chord with Harrison.  Glancing over at Bo's truck, Harrison recollected how Rhee had moved in front of  Bo, forcing the boy to look at her. There was a look on his face of sheer panic, and his tightly clinched jaw quivered. When Bo finally met Rhee's eyes, Harrison watched on – taking in every perfectly enunciated word. “Benjamin Ora, I’m tired. I’m tired of the drinking. I’m tired of the fighting. And I’m tired of trying to be your conscience. That’s God’s role in your life – not mine – I’m just your mother. Son, you have a choice to make.” After giving Bo time to absorb her words, Rhee had asked him one simple question. “What are you going to do to set your life in order?”  [excerpt from After Storms - scheduled release March, 2019]

Wow! I don't know about anyone else, but these words resonated with me. That Rhee, she must be pretty smart... 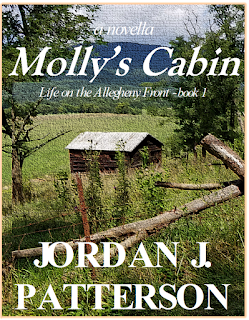 I'm pleased to announce that the kickoff novella for the series

"Life on the Allegheny Front"

has been published as an e-book and on sale at Amazon.com!

If you're looking for a novel series that isn't afraid to address the issues we're currently facing right here in the Mountain State - this series is for you!

The short of it:
Following the fire that killed spinster Molly Sivits’ parents, neighbor Pete Evans organizes their community to rally around Molly, offering her hope, healing, a home, and love that defies all odds.

Just a little more than that:
"When her family home is destroyed by fire, Spinster Molly Sivits is left orphaned and homeless. Once she is physically on the mend, her neighbors clean up the ruins, building her a cabin nearby. But fear of being alone holds Molly captive, and she only visits the cabin, never moving in.

Not wanting Molly to continue on the slippery slope of depression, while she is recuperating in his family's home, Pete Evans, the very man who found her during the fire, helps her overcome a potential opioid addiction and reintroduces her to life. A decade younger than Molly, Pete is determined to literally give her beauty for ashes.

Years later, although it takes some convincing on Pete's part, the two marry and Spinster Sivits becomes not only a wife and mother, but a matriarch of the Evans family. As the years pass, Molly's cabin becomes a safe haven on what she deems Serenity Farm."

And the rest of the story:
Molly's Cabin is the novella that will kick off the novel series Life on the Allegheny Front.

**The series by author Jordan J. Patterson is available as an e-book Amazon. com with softcover books being developed for release soon! 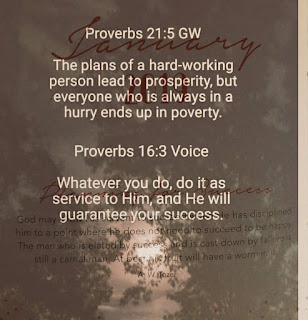 I decided early on that this was going to be a great year...and then I got out of bed.

Seriously though, twenty-three days in, and I'm already wanting to ask God for a time-out - a reprieve - a break. Can we do that? I sure hope so. 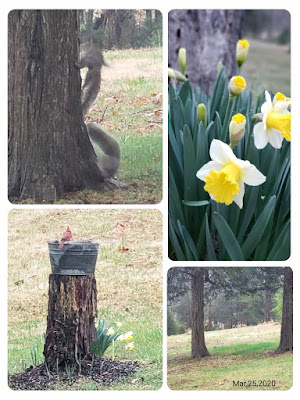